On March 7, 2019, the Japan IP High Court revoked a decision by the Japan Patent Office (JPO) to invalidation trial over a dispute of similarity between trademark “BULK AAA” and “BULK HOMME”, ruled “BULLK AAA” shall be retroactively invalid. [Judicial case no. Heise30(Gyo-ke)10141]

The case was brought into the IP High Court after the JPO decided to dismiss an invalidation trail (case no. 2017-890079) claimed by BULK HOMME Co., Ltd. (Plaintiff), an owner of senior trademark registration no. 5738351 for the mark combined “BULK HOMME” with other literal elements (see below) over goods of cosmetics and skin care products for men in class 3.

In the invalidation trial, plaintiff asserted trademark registration no. 5931607 for word mark “BULK AAA” in standard character shall be invalid in violation of Article 4(1)(xi) of the Trademark Law since the mark is confusingly similar to “BULK HOMME” and designates cosmetics (class 3) which is undoubtedly identical with or similar to the goods designated under its own senior registration. 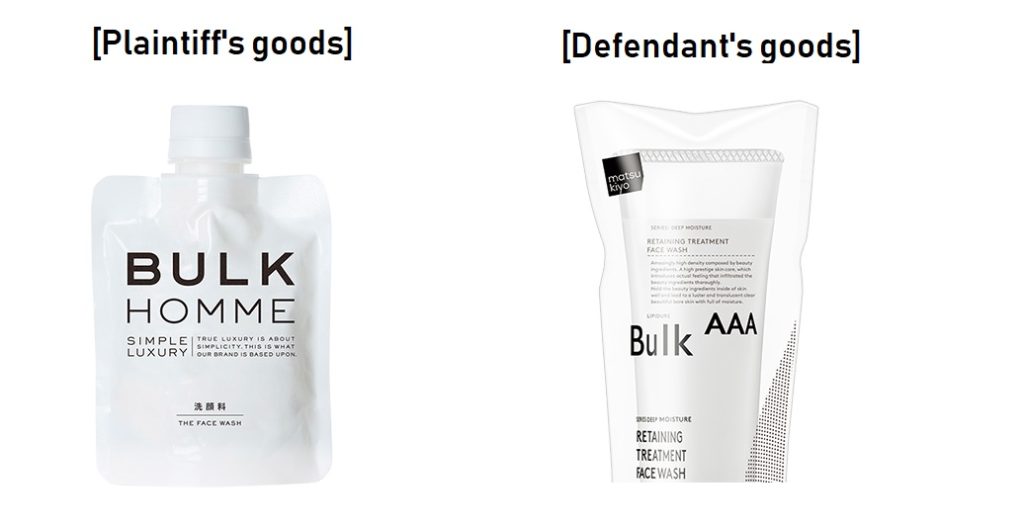 Article 4(1)(xi) is a provision to prohibit from registering a junior mark which is deemed identical with, or similar to, any senior registered mark.

Inter alia, plaintiff strongly argued the term “AAA” in disputed mark lacks distinctiveness as a source indicator in relation to cosmetics since “AAA” is a term commonly known to represent the highest possible rating assigned to the bonds of an issuer by credit rating agencies. Given the circumstance, relevant consumes of cosmetics are likely to consider the term in disputed mark a qualitative indication of the goods even if the term has not been used as such indication in connection with cosmetics in fact.

However, the Trial Board of JPO set aside the allegation by stating that disputed mark “BULK AAA” shall be assessed in its entirety. It is groundless to compare a word portion “BULK” of disputed mark with “BULK HOMME” given the Board could not identify any facts to assume relevant consumers of cosmetics conceive the term “AAA” of disputed mark as a qualitative indication. Both marks are sufficiently distinguishable from visual, phonetic, and conceptual points of view and dissimilar as a whole.

To contend against the decision, plaintiff filed an appeal to the IP High Court.

The IP High Court, to the contrary, sided with plaintiff and completely negated fact-findings made by the Trial Board of JPO. The Court held the term “AAA” is recognized as a qualitative indication even when used on cosmetics and thus the word portion of “BULK” is likely to play a dominant role of source indicator. If so, it is never inappropriate to pick up the word “BULK” from disputed mark and compare it with other mark in the assessment of mark similarity.

Besides, “HOMME” is a French term meaning “for men”. From the produced evidences, it seems apparent the term has been used in relation to men’s cosmetics, and consumers are accustomed to it and recognize the meaning. Given the term is depicted in a thinner font than “BULK” in the citation, “BULK” gives dominant impression as a source indicator in the mind of consumers. Accordingly, it is reasonable to pick up the word “BULK” from the citation and compare it with other mark in the assessment of mark similarity.

The Court found that the Trial Board materially erred in the fact-finding and assessing similarity of mark. As long as dominant portion “BULK” of both marks and designated goods are identical, disputed mark shall be invalid based on Article 4(1)(xi).