In a recent appeal trial over trademark dispute, the Trademark Appeal Board within the Japan Patent Office (JPO) overturned the Examiner’s determination and held that a combination mark with Tokugawa crest image and literal elements written in Chinese characters is dissimilar to, and unlikely to cause confusion with a senior trademark registration for the “TOKUGAWA CREST” device mark in connection with pickled plums of class 29.
[Appeal case no. 2018-6893, Gazette issue date: March 29, 2019]

The Tokugawa clan was the family that established the Edo shogunate, also known as the Tokugawa shogunate, (1603–1867), the final period of traditional Japan, a time of internal peace, political stability, and economic growth under the shogunate (military dictatorship) founded by Tokugawa Ieyasu. The Tokugawa shogunate continued to rule Japan for a remarkable 250 years and ended in 1868, with the Meiji Restoration when the Emperor regained power.

The Tokugawa crest was a circle in closing three leaves of the awoi (a species of mallow, found in Central Japan) joined at the tips, the stalks touching the circle (see below). 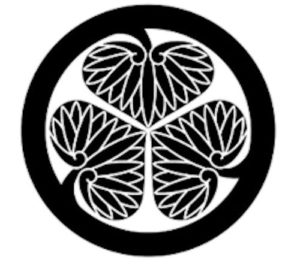 This gilded trefoil is gleaming on the property of the shogun and mausoleum even now in Japan.

Kabushiki Kaisha Kiwa-Nouen Products, a Japanese merchant dealing with plums and its products filed a trademark application for a combination mark with Tokugawa crest image and literal elements written in Chinese characters (see below) covering pickled plums in class 29 on June 21, 2016 [TM application no. 2016-72127]. 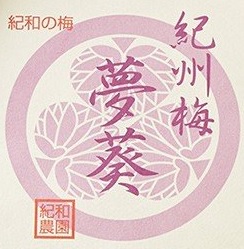 Three Chinese characters “紀州梅” in the upper right of the mark lacks distinctive since the term means plums made in Kishu, the name of a province in feudal Japan (the area corresponds to nowadays Wakayama Prefecture and southern Mie Prefecture), as a whole. Two characters “夢葵” in the center of the mark to be pronounces as “yume-awoi” is obviously a coined word and distinctive in relation to pickled plums.

The mark is actually in use on high-class pickled plums produced by applicant. 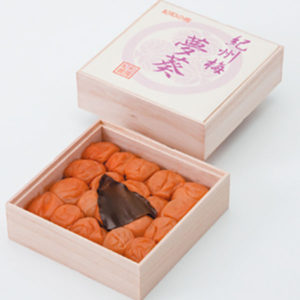 Going through substantive examination by the JPO examiner, applied mark was totally refused registration based on Article 4(1)(vi), (vii), (xv) of the Trademark Law on the ground that the mark contains a device resembling the Tokugawa crest which becomes famous as a source indicator of ‘Public Interest Incorporated Foundation The Tokugawa Museum’.
If so, using the mark on the designated goods by an unauthorized entity may free-ride goodwill vested in the Tokugawa crest and anything but conductive to the public interest. Besides, relevant consumers are likely to confuse or misconceive pickled plums using applied mark with goods from The Tokugawa Museum or any business entity systematically or economically connected with the museum.

Article 4(1)(vii) of the Trademark Law prohibits any mark likely to cause damage to public order or morality from registration.

Applicant filed an appeal against the refusal on May 21, 2018 and argued dissimilarity of the marks.

The Board reversed the examiner’s refusal and admitted applied mark to registration by stating that:

It becomes trade practice to print family crest on the packaging of food products. Especially, trefoil awoi crest has been commonly used on the packaging of specialty products or souvenir from Aichi (Owari), Wakayama (Kishu) and Ibaragi (Mito) Prefectures where descendants from clan founder Tokugawa Ieyasu’s three youngest sons governed during the Edo shogunate. Besides, from appearance, Tokugawa crest image in applied mark looks like a background pattern and thus relevant consumers are unlikely to aware that the pattern serves the legally defined role of a trademark because the image is colored washier than literal elements. If so, two Chinese characters “夢葵” of the mark functions primarily as a source indicator.

Based on the foregoing, the Board considered, given the Tokugawa crest image in the applied mark does not play a role of source indicator at all, both marks are dissimilar and unlikely to cause confusion from visual, phonetic and conceptual points of view even if the Tokugawa crest becomes famous as a source indicator of Public Interest Incorporated Foundation The Tokugawa Museum in fact. Likewise, the Board found no specific reason to cause damage to public order or morality from applied mark.