In a decision to the invalidation trial claimed by LUIS POULSEN A/S, a Danish company, the Trial Board of Japan Patent Office (JPO) upheld the petition and invalidated TM registration no. 5643726 for a combination mark containing the pendant lamp shade design (see below) in violation of Article 4(1)(xix) of the Trademark Law.
[Invalidation case no. 2017-890003, Gazette issue date: September 28, 2018]

Disputed mark, consisting of a literal element “R&M Interior Store”, “R&M” logo in the shape of shield and the pendant lamp shade design (see below), was filed on June 14, 2013 by a Japanese business entity, designating wholesale or retail services for lighting apparatus and others in class 35. 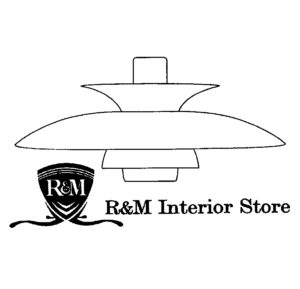 During the invalidation trial, LUIS POULSEN A/S argued disputed mark shall be invalidation based on Article 4(1)(xix) since the applicant filed the mark, confusingly similar to trademark registration no. 5825191 for 3D mark in the shape of unique pendant lamp shade (see below) well-known for “PH5” created by a Danish designer Poul Henningsen, with a malicious intention to damage claimant. 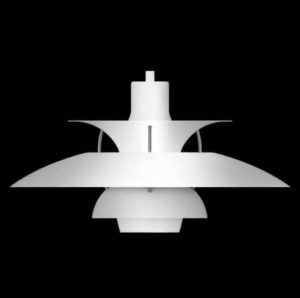 According to supporting evidence produced to the trial, “PH5” lamp was originally designed in 1958. It has been promoted for sale in the marketplace of Japan since 1976. More than 500,000 lamps have been produced and sold around the globe. To bolster its reputation, LUIS POULSEN submitted a written declaration by Danish Ambassador to Japan. Besides, 3D shape of “PH5” lamp shade is successfully registered by finding acquired distinctiveness as a result of substantial use and uniqueness finally to serve as a source indicator (TM Registration no. 5825191).

Article 4(1)(xix) prohibits to register a trademark which is identical with, or similar to, other entity’s famous mark, if such trademark is aimed for unfair purposes, e.g. gaining unfair profits, or causing damage to the entity.

The Board found that:

Based on the above findings, the Board concluded that applicant filed a similar mark to “PH5” well-known for a pendant lamp shade of LUIS POULSEN with a malicious intention to gain unfair profits or cause damage to claimant. Thus, disputed mark shall be invalidated in violation of Article 4(1)(xix) of the Trademark Law.