The Appeal Board of Japan Patent Office (JPO) refused Trademark Application No. 2016-85559 for a device mark consisting of metallic rings on goods of metallic fishing nets in class 6 on the ground of conflict with Article 4(1)(vi) of the Japan Trademark Law.

Mark in question ( see below) was filed on August 8, 2016 by designating goods of metallic fishing nets in class 6. 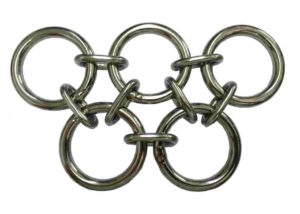 Article 4(1)(vi) of the Trademark Law

“The Olympic symbol consists of five interlaced rings of equal dimensions (the Olympic rings), used alone, in one or in five different colours. When used in its five-colour version, these colours shall be, from left to right, blue, yellow, black, green and red. The rings are interlaced from left to right; the blue, black and red rings are situated at the top, the yellow and green rings at the bottom.”

The Olympic Rings, publicly presented for the first time in 1913, remain a global representation of the Olympic movement and its activity.

In an appeal, the Board sustained examiner’s refusal and decided the mark in question shall be refused on the same ground.
The Board stated that mark in question has same configuration with the Olympic Rings and thus consumers at the sight of the mark are likely to conceive a well-known Olympic symbol from appearance regardless of difference in small rings to connect five symbolic rings.
[Appeal case no. 2018-1590, Gazette issued date : August 31, 2018]