Opposed mark “SPEC” was filed by SPEC CORPORATION, a Japanese business entity on September 3, 2015 by designating the goods of audio speakers; audio amplifiers; audio players; CD players; audio equipment to be connected with internet” in class 9.
The JPO admitted registration on September 15, 2017 and published for registration on October 10, 2017.

Samsonite IP Holdings S.à.r.l., operating as a wholly-owned subsidiary of Samsonite International S.A., a travel luggage company, owns international TM registration no. 1024440 for the mark “SPECK” over the goods of “Protective carrying cases for portable electronic listening devices and music players, namely, MP3 players, and for global positioning systems (GPS devices), mobile and cellular telephones, and portable media players” in class 9 and it has become effective in Japan since 2012.

As a result of acquisition of Speck Products, a leading U.S. designer and distributor of slim protective cases for personal electronic devices, Samsonite extends its brand portfolio beyond its traditional strength in travel luggage products. 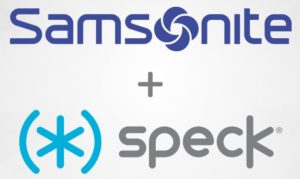 On December 11, 2017, Samsonite IP Holdings S.à.r.l. filed an opposition and cited senior registered mark “SPECK”.
In the opposition brief, Samsonite asserted opposed mark shall be cancelled in violation of Article 4(1)(xi) of the Japan Trademark Law.
Article 4(1)(xi) is a provision to refrain from registering a junior mark which is deemed identical with, or similar to, any senior registered mark.

The Opposition Board negated similarity of mark between SPEC and SPECK, stating that:

“From appearance, both marks are distinguishable by means of a fact that opposed mark does not contain “K” in the suffix position since such difference shall not be negligible in the configuration consisting of small number of letters, four or five. Conceptually, opposed mark can be perceived as a word to mean specification. Meanwhile, opponent mark does not give rise to any specific meaning. Hence, both marks are dissimilar in concept.
It is doubtless that both marks give rise to the same sound, however, distinctive gap in appearance and concept may cause consumers to recognize them as a different source indicator. If so, both marks are unlikely to cause confusion and thus deemed dissimilar.”

Based on the foregoing, the Board decided opposed mark is not subject to Article 4(1)(xi), and admitted registration as a status quo.