The Japan Patent Office (JPO) decided in a trademark opposition that ROOT is dissimilar to ROOTS in appearance, pronunciation and meaning.
[Opposition case no. 2017-900326, Gazette issue date: June 29, 2018]

Opposed mark consists of the square root design and a word “ROOT” (see below). It was applied for registration on February 9, 2017 by designating bags in class 18 and retail or whole sale services in relation to bags and clothing in class 35.
JPO granted registration in August 4, 2017 (TM registration no. 5969604). 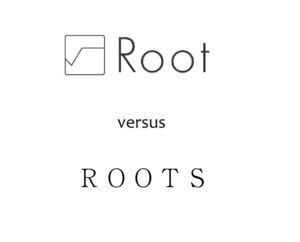 Opponent, Roots Corporation, a Canadian business entity, filed an opposition against opposed mark based on a self-owned senior trademark registration no. 5947860 for the work mark “ROOTS” (see above) in class 35 for on-line retail or wholesale services in relation to bags and clothing.

Opponent argued opposed mark shall be canceled in violation of Article 4(1)(xi) of the Trademark Law because “ROOT” and “ROOTS” are confusingly similar.

The Opposition Board of JPO negated similarity between the ROOT mark and ROOTS, stating that:

“From appearance, both marks are distinguishable since opponent mark does not contain the square root device and “S” in the suffix position. Besides there exist differences in font design and case sensitivity.
Regarding pronunciation of the marks, opposed mark gives rise to a sound of “ruːt”. In the meantime, opponent mark sounds “ruːts”. Given the short sound of three syllables, a different pronunciation in the suffix position is not in any way ignorable. If so, both marks can be phonetically distinctive.
Conceptually, opposed mark gives rise to a meaning of the square root. Meanwhile, opponent mark can be perceived as a word to mean the parts of plant that grow under the ground or ancestor. Hence, both marks are distinctive in concept as well.”

Based on the foregoing, the Board concluded that it is unlikely to consider relevant consumers at the sight of opposed mark would connect a word “Root” adjacent to the square root device with opponent mark. Therefore, the Board dismissed opposition and allowed opposed mark to survive.