The Appeal Board of Japan Patent Office (JPO) admitted registration of a mark consisting of jigsaw puzzles design and “TA TRUMP” (see below), saying that it does not violate personality rights of Mr. Donald John Trump, the President of the United States.

A Japanese individual filed a trademark application for the mark consisting of jigsaw puzzles design and a word of “TA TRUMP” (see below) on November 23, 2016 by designating “psychology education cards” in class 16. 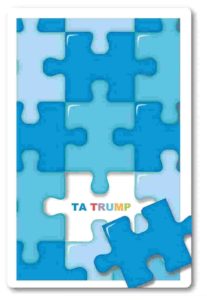 JPO examiner refused the mark on the grounds that it comprises a famous abbreviation of Mr. Donald John Trump, the President of the United States and presumably the applicant would not obtain consent from him.

Article 4(1)(viii) of the Trademark Law prohibits registration of trademarks which contain the representation or name of any person, famous pseudonym, professional name or pen name of another person, or famous abbreviation thereof. Notwithstanding the provision, the article is not applicable where the applicant of disputed mark produces the written consent of the person.

The Supreme Court of Japan ruled the article has aimed to protect personality rights of a living individual. A diminutive of foreign celebrity falls under the category of “abbreviation” even if his/her full name is not so familiar among Japanese citizen.

To contest the refusal, the applicant filed an appeal on August 11, 2017.

In the decision rendered on January 10, 2018, the Appeal Board overruled the refusal and admitted registration of the mark in question by stating that: