In a dispute regarding similarity between trademark “SeaGull-LC” and “SEAGULL”, the  IP High Court took the side of original decision rendered by the Japan Patent Office on the following ground. 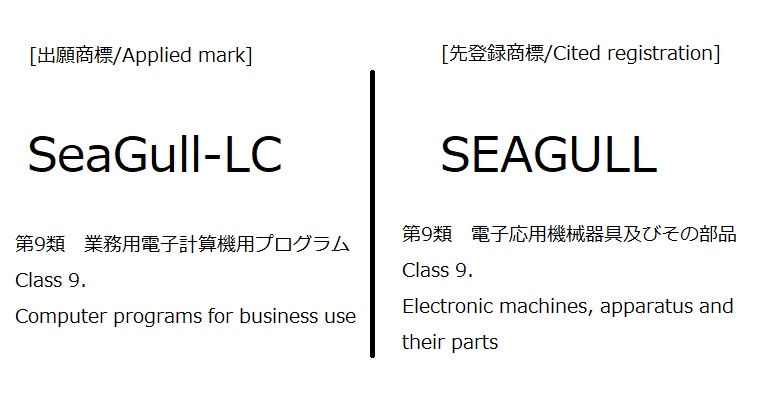 The term of “SeaGull”, giving rise to a meaning of a gull frequenting the sea and a pronunciation of “siːɡʌl”, is evidently distinctive as a source indicator in relation to the designated goods. In the meantime, a term of “LC” in itself does not have any specific meaning in English or other foreign languages. It becomes common in trade to use two alphabetical letters accompanying a brand name on goods with an intention to represent a model or series of the brand. If so, “LC” lacks inherent distinctiveness as a source indicator of designated goods as long as relevant traders and consumers perceive the term to indicate a model or standards of the goods.

In appearance of the applied mark, “SeaGull” and “LC” can be seen separately by means of hyphen. Hyphen in itself does not serve to fuction as a source indicator. It just connects two words to constitute new term as a whole, or separates a composing element of compound word to make it more visible. Since each connected word is respectively distinguishable in the aspect of linguistics, it should be allowed to extract such word connected by hyphen independently. Thus, it is admissible to consider the term “SeaGull” as the dominant portion of applied mark and compare the portion with senior trademark registration in the assessment of trademark similarity.  Accordingly, applied mark gives rise to a meaning of a gull frequenting the sea and a pronunciation of “siːɡʌl”  from the dominant portion as well as “siːɡʌl-el-siː” from its entirety.

It is worthy to note that the Court considered “hyphen” functions to separate a mark in the assessment of trademark similarity regardless of its actual function to connect words. It is advisable to investigate trademark registration consisting of each word when choosing a trademark including hyphen between word elements.