MariCar rents out go-karts that have been modified to run on public roads. 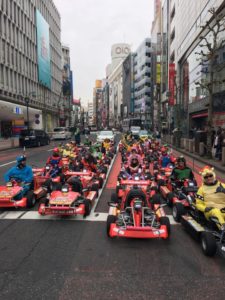 The go-kart service is exceedingly popular with foreign tourists, with many of the participants donning costumes that look similar to Nintendo game characters such as Super Mario.
http://maricar.com/

In the suit, Nintendo claims MariCar violated copyright by renting unauthorized costumes of Nintendo game characters such as Super Mario to its customers and using pictures of them to promote its business.

Nintendo is seeking ¥10 million in damages from the company and an end to the alleged copyright infringement.

Dispute over the MariCar trademark

Nintendo also alleged in an opposition over the MariCar trademark registration No. 5860284 covering goods and services in class 12 ,35 and 39 that MariCar is an abbreviation of “Mario Kart,” one of its blockbuster game titles, however, the JPO rules against Nintendo to admit go-kart company keep MariCar trademark in a decision dated Jan. 26, 2017 [Opposition No. 2016-900309].

In the opposition, Nintendo claimed that MariCar was widely interpreted by the public as short for “Mario Kart,” citing other examples of popular video games that go by abbreviated nicknames in Japanese, such as “Pokemon” for “Pocket Monsters,” “Pazudora” for “Puzzle & Dragons” and “Sumabura” for “Super Smash Bros.”
Consequently, the Opposition Board of JPO denied it and held the trademark MariCar was neither widely used nor recognized by game users as an abbreviation of Nintendo’s blockbuster video game title “Mario Kart,” adding that it was “an unassociated trademark.”